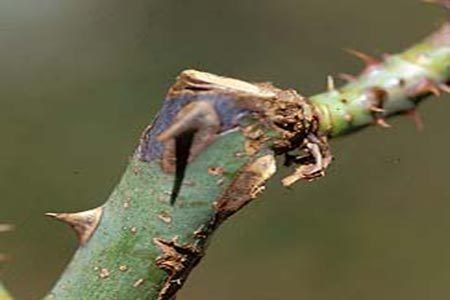 Coniothyrium spp: After a long cold wet winter, roses can be expected to have some dead and cankered canes. While these pathogenic fungi are not very sophisticated, they can cause considerable damage. The problems can be especially acute on old established roses that have lost some vigor and on young bare root roses emerging from cold storage.

In early spring, pruned stems provide wound sites which can be colonized by canker causing fungi. The stems will yellow, often have red spots and later become brown or black. Black erumpent spots can often be found in the discolored tissue which are the fruiting structures of the fungus containing spores.

The canker fungus is most active during the cold time of the year when roses are not actively growing. Pruning cuts or wounds on stems provide sites of entry for germinating spores. The fungi are not high level pathogens and can not produce the disease when conditions are favorable for plant growth. During the dormant months, fungi colonize the tissues, sporulate and are spread to other pruning or wound sites. The disease can be extensive and severe under the ideal conditions for development.

Promoting vigorous growth and removal of dead canes and stubs will help to reduce the primary source of inoculum. When pruning before winter always make an angular cut close to an active bud so the callus can form a protective layer before winter. A dormant spray could be used to protect pruning cuts and wounds during the cold and wet winter. In spring, removal of infected canes and a general spray program for fungal diseases should reduce canker problems and protect the plants until they can become vigorous growers once again.