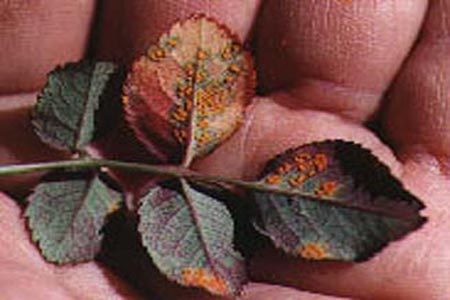 Phragmidium spp: The rust of rose is one of the most commonly found and easily identified diseases of rose. Severe outbreaks occur where cool temperatures and high moisture are found during the prime growing season. Where foliage is heavy, the first symptoms usually are found close to the ground and on the insides of plants. Nine species of the rust fungus are known to occur. The fungus is complex having up to five different spore stages in its life cycle. The resistance of various cultivars is usually well documented because rust is a very common disease in some parts of the country.

In early spring powdery pustules of light orange to yellow spores appear on the under side of leaves. Soon after these aecieospores can be found on the upper side of leaves where they are more obvious. As we move into summer the uredial stage usually is predominate forming the typical red brown to orange spores. This stage can repeat several times during the growing season usually in 10 to 14 day intervals. Finally as fall approaches and evenings become cool the over wintering telial stage develops black teliospores. Leaves, succulent canes and flower parts are all susceptible to the rust fungus.

The fungus over winters as teliospores on fallen leaves or on infected canes. The spores are wind borne and germinate to infect leaves through the stomata. Rust fungi are obligate parasites and can not be cultured. As the infection proceeds the various spore stages develop on rose, there is no alternate host for rose rust. Reinfection and spread occurs through aeciospores and urediospores. Spore germination requires cool summer temperatures and continuous moisture for at least two hours so the germ tubes can enter the leaf stomates. Teliospores serve as a means of over wintering on leaves and infected canes.

In areas where Rust is severe, sanitation should be practiced to reduce inoculum and prevent early season infections. Infected canes should also be spring pruned to reduce the initial inoculum levels. Pruning very dense bushes will help to reduce the moisture levels inside of plants and prevent some infections. Preventative fungicidal sprays should be applied every 7 to 10 days when conditions are favorable for rust development.