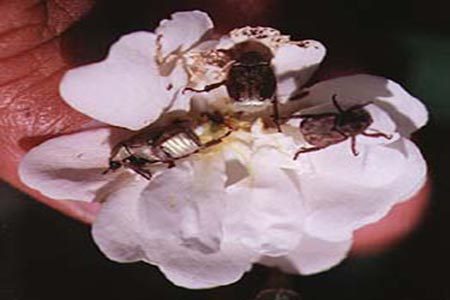 Hoplia beetles are close relatives of the dreaded Japanese and Chinese Beetles. They are day flyers and prefer the flowers of white to whitish flowers. The adults are small about 1/4 inch to 3/8 inch long and somewhat squarish and dorsally flattened in shape. Their ventral surface are covered with silvery and coppery colored scales while the elytra and dorsal surface is brownish to reddish brown in color. Silvery scales are also found on the dorsal surface giving the dorsal surface a mottle appearance on various shades of brown. There is only one generation per year with the adults emerging from mid March through May in areas from Palm Springs and Cathedral City in southern California to Redding in northern California.

There are several species of Hoplia beetles throughout the United States. The western species, Hoplia callipyge LeConte, is also known as the grapevine hoplia and it appears to be the only species of this group that attacks roses. According to Essig (1926:445) this beetle also feeds on the young leaves, flowers, and fruit of grapes, peaches, and almonds and on the flowers of ceanothus, greasewood, calla lilly, California poppy, magnolia, lupine, olive, orange, and willow, and on the leaves of beans, horse beans, peas, and vetches. On roses the beetles feed on the petals of opening white and light colored roses by chewing small holes and leaving the petals with a lacey appearance. In my garden, they prefer the white flowers of Sally Holmes, Popcorn, Irresistible, Grace Seward, Class Act, and the Apricot Nectar, a peach colored rose.

Adult beetles emerge from the soil in as early as mid March in southern California and they can be common from late April through mid May in norhtern California. They are present for only about a month in any one area of California depending on the weather. Mating orgies take place on host flowers. The gravid females oviposit in the soil near host plants and upon hatching the larvae burrow in the soil and feed on the host plant roots. They overwinter as a larvae and continues development in the spring. The full grown larva or grub is white. Pupation occurs in the spring. The hoplia beetle has only one generation per year.

Scouting or monitoring for the presence of hoplia beetles is very important for adequate control. Adults are readily attracted to many light colored roses and other flowers. Light colored roses should be inspected from mid March through May for skeletonized petalsthrough July, the foliage should be inspected for skeletonized rose petals and for the presence of adult beetles tucked inside the flowers between the rose petals.

Hoplia beetles can be handpicked and destroyed if the infestations are light. They can also be handpicked and drowned by dropping them into a bottle filled with soapy water. Satisfactory control can be achieved with the application of insecticides such as carbaryl (Sevin), acephate (Orthene), diazinon, and chlorpyrifos (Dursban), Merit, etc. Please read the insecticide label throroughly and as some insecticides such as diazinon can cause phytotoxic reactions to new foliage if applied when the weather temperatures are above 80 degrees F.