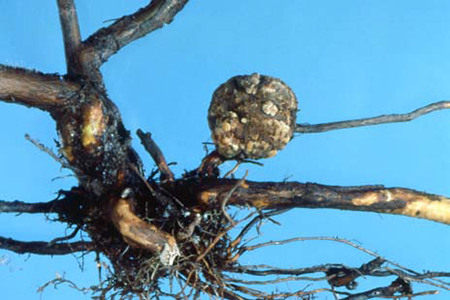 Posted On September 2, 2017 at 3:43 am by lovetadmin / Comments Off on PLANT PATHOLOGY – BACTERIAL CROWN GALL OF FRUIT CROPS

Crown gall is caused by the bacterium Agrobacterium tumefaciens. This bacterium has the widest host range of any plant pathogen. It is capable of causing tumors, or “galls,” on virtually all plant species, except the monocots (grasses). A similar bacterium, Agrobacterium rubi, causes galls on the canes of brambles. All fruit crops grown in Ohio are susceptible. The disease is particularly destructive on brambles (raspberries and blackberries) and grapes. It can also cause severe problems on apple, pear, blueberry, all stone fruits, and on ornamentals.

The bacteria induce galls or tumors on the roots, crowns, trunks, and canes of infected plants. These galls interfere with water and nutrient flow in the plants. Seriously infected plants may become weakened, stunted, and unproductive.

The disease first appears as small overgrowths or galls on the roots, crown, trunk, or canes. Galls usually develop on the crown or trunk of the plant near the soil line or underground on the roots. Above ground or aerial galls may form on canes of brambles and highly susceptible cultivars of grape. Although they can occur, aerial galls are not common on fruit trees.

In early stages of development the galls appear as tumor-like swellings that are more or less spherical, white or flesh-colored, rough, spongy (soft), and wart-like. They usually form in late spring or early summer and can be formed each season. As galls age they become dark brown to black, hard, rough, and woody. Some disintegrate with time and others may remain for the life of the plant.

The tops of infected plants may appear normal. If infection is severe, plants may be stunted, produce dry, poorly developed fruit, or show various deficiency symptoms due to impaired uptake and transport of nutrients and water.

The crown gall bacterium is soil-borne and persists for long periods of time in the soil in plant debris. It requires a fresh wound in order to infect and initiate gall formation.

Wounds that commonly serve as infection sites are those made during pruning, machinery operations, freezing injury, growth cracks, soil insects, and any other factor that causes injury to plant tissues. Bacteria are abundant in the outer portions of primary galls, which is often sloughed off into the soil. In addition to primary galls, secondary galls may also form around other wounds and on other portions of the plant in the absence of the bacterium. The bacteria overwinter inside the plant (systemically) in galls, or in the soil. When they come in contact with wounded tissue of a susceptible host, they enter the plant and induce gall formation, thus completing the disease cycle. The bacteria are most commonly introduced into a planting site on or in planting material.