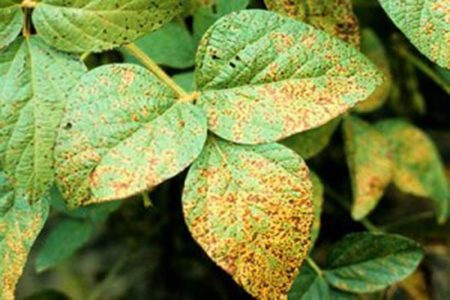 The Septoria fungus is common in soybean residue and spreads from the soil to young soybean plants by splashing rain. Infection occurs as early as the V2 growth stage on lower leaves.

Under favorable weather conditions (warm, wet weather), the disease may move up through the plant. Late in the growing season, infected leaves may turn rusty brown or yellow and drop prematurely. The spread of the fungus is usually halted during hot, dry weather.

Septoria leaf spot does not usually affect soybean productivity in Wisconsin. In some years the disease can cause premature defoliation, which can be confused with normal maturity. Yield loss occurs most often in high yield environments and is related to timing and rate of defoliation. Nationally, yield loss estimates are in the 8 to 15% range and occur when 25-50% of the canopy prematurely defoliates. Disease severity at the R6 growth stage is predictive of yield. Severe brown spot results in smaller seed size.

Symptoms of Septoria leaf spot can also develop on stems and pods of plants approaching maturity.  Stem and pod lesions have indefinite margins, are dark in appearance and range in size from flecks to lesions several inches in length, but they are not distinct enough to be diagnostic.  Seed are infected but symptoms are not conspicuous.

The onset of Septoria leaf spot symptoms is influenced by the relative maturity of the soybean variety, and symptoms appear earlier in the season on an early-maturing variety. Complete resistance has not been identified in soybean varieties or lines, but varieties do differ in partial or rate-reducing resistance which can be used effectively.

Crop rotation is an effective preventative strategy. Septoria leaf spot is more severe in continuously cropped soybean fields. The host range includes most species of Glycine, other legume species, and common weeds such as velvetleaf.