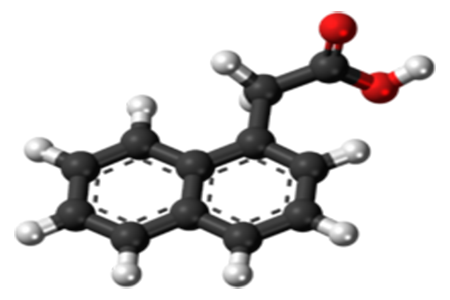 WHAT IS 1-NAPHTHALENE ACETIC ACID?

1-Naphthaleneacetic acid (NAA) is an organic compound with the formula C10H7CH2CO2H. This colorless solid is soluble in organic solvents. It features a carboxylmethyl group (CH2CO2H) linked to the “1-position” of naphthalene.

NAA is a synthetic plant hormone in the auxin family and is an ingredient in many commercial plant rooting horticultural products; it is a rooting agent and used for the vegetative propagation of plants from stem and leaf cutting. It is also used for plant tissue culture.

The hormone NAA does not occur naturally, and, like all auxins, is toxic to plants at high concentrations. In the United States, under the Federal Insecticide, Fungicide, and Rodenticide Act (FIFRA), products containing NAA require registration with the Environmental Protection Agency (EPA) as pesticides.

NAA is widely used in agriculture for various purposes. It is considered to be only slightly toxic but when at higher concentrations it can be toxic to animals. This was shown when tested on rats via oral ingestion at 1000–5900 mg/kg.

NAA has been shown to greatly increase cellulose fiber formation in plants when paired with another phytohormone called gibberellic acid. Because it is in the auxin family it has also been understood to prevent premature dropping and thinning of fruits from stems. It is applied after blossom fertilization.

Increased amounts of it can actually have negative effects however, and cause growth inhibition to the development of plant crops. It has been used on many different crops including apples, olives, oranges, potatoes, and various other hanging fruits. In order for it to obtain its desired effects it must be applied in concentrations ranging from 20–100 µg/mL.

NAA present in the environment undergoes oxidation reactions with hydroxyl radicals and sulphate radicals. Radical reactions of NAA was studied by using pulse radiolysis technique. Hydroxyl adduct radical was formed as the intermediate during the reaction of hydroxyl radical with NAA. The intermediate Naphtyl methyl radical was formed during the reaction of sulphate radical anion with NAA.

In micro propagation of various plants NAA is typically added to a media containing nutrients essential to the plants survival. It is added to help induce root formation in various plant types. It can also be applied by spraying it onto plants and which is typical in agricultural use. It is prohibited in many areas to use it in high concentrations due to the health concerns towards humans and other animals.

NAA can be detected by HPLC-tandem mass spectrometry (HPLC-MS/MS).