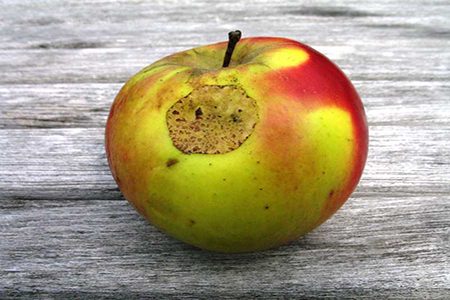 HOW TO TREAT APPLE SCAB?

Apple scab is a disease of Malus trees, such as apple trees, caused by the ascomycete fungus Venturia inaequalis. The disease manifests as dull black or grey-brown lesions on the surface of tree leaves, buds or fruits.

Lesions may also appear less frequently on the woody tissues of the tree. Fruits and the undersides of leaves are especially susceptible.

The disease rarely kills its host, but can significantly reduce fruit yields and fruit quality. Affected fruits are less marketable due to the presence of the black fungal lesions.

The infection cycle begins in the springtime, when suitable temperatures and moisture promote the release of V. inaequalis ascospores from leaf litter around the base of previously infected trees.

These spores rise into the air and land on the surface of a susceptible tree, where they germinate and form a germ tube that can directly penetrate the plant’s waxy cuticle.

A fungal mycelium forms between the cuticle and underlying epidermal tissue, starting as a yellow spot that grows and ruptures to reveal a black lesion bearing asexually as the conidia are released and germinate on fresh areas of the host tree, which in turn produce another generation of conidial spores.

This cycle of secondary infections continues throughout the summer, until the leaves and fruit fall from the tree at the onset of winter.

The reproductive conidia of Venturia inaequalis erupting through the cuticle of a crabapple leaf.

Over the winter, V. inaequalis undergoes sexual reproduction in the leaf litter around the base of the tree, producing a new generation of ascospores that are released the following spring.

Scab lesions located on the woody tissues may also overwinter in place, but will not undergo a sexual reproduction cycle; these lesions can still produce infective conidial spores in the spring.

In affected orchards, new infections can be reduced by removing leaf litter and trimmings containing infected tissue from the orchard and incinerating them.

This will reduce the amount of new ascospores released in the spring. Additionally, scab lesions on woody tissue can be excised from the tree if possible and similarly destroyed.

Chemical controls can include a variety of compounds. Benzimidazole fungicides, e.g., Benlate (now banned in many countries due to its containing the harmful chemical benzene) work well but resistance can arise quickly.

A number of other chemical classes including sterol inhibitors such as Nova 40, and strobilurins such as Sovran are used extensively; however, some of these are slowly being phased out because of resistance problems.

Contact fungicides not prone to resistance, such as Captan, are viable choices. Potassium bicarbonate is an effective fungicide against apple scab, as well as powdery mildew, and is allowed for use in organic farming.

Copper and Bordeaux mixture are traditional controls but are less effective than chemical fungicides, and can cause russeting of the fruit. Wettable sulfur also provides some control. Timing of application and concentration varies between compounds.

An apple scab prognostic model called RIMpro was developed by Marc Trapman, which numerically grades infection risk and can serve as a warning system. It allows better targeted spraying. Parameter for calculation are wetness of leaves, amount of rain fall and temperature.

Fifteen genes have been found in apple cultivars that confer resistance against apple scab. Researchers hope to use cisgenic techniques to introduce these genes into commercial cultivars and therefore create new resistant cultivars. This can be done through conventional breeding but would take over 50 years to achieve.

Of the known resistance genes, only the Vf gene has been widely introgressed into new apple cultivars (such as Red Prima and Katrina). However, apple scab has shown that it can evolve to render the vf gene ineffective.