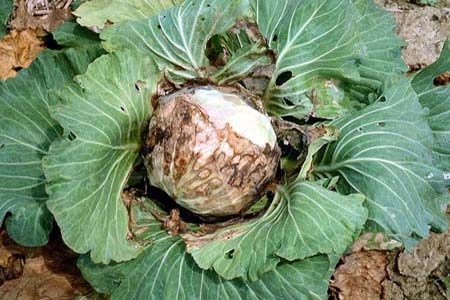 WHAT IS THE ERWINIA CAROTOVORA BACTERIA? AND HOW TO TREAT IT?

Posted On June 28, 2018 at 4:56 pm by lovetadmin / Comments Off on WHAT IS THE ERWINIA CAROTOVORA BACTERIA? AND HOW TO TREAT IT?

Erwinia carotovora is a rod shaped bacterium that was named after the crop of carrots from which it was first isolated.

The bacterium infects a variety of vegetables and plants including carrots, potatoes, cucumbers, onions, tomatoes, lettuce and ornamental plants like iris.

These widespread microbes can be found in soil, guts of insects, water and suspended aerosols in air.

A major problem in agriculture, the microbes ceaselessly invade crops of potatoes and other vegetables in the fields or in storage that cause plant tissues to become soft and watery which eventually turn slimy and foul-smelling.

Only the genome of Erwinia carotovora subsp. atroseptica strain SCRI1043 (Eca 1043) has been sequenced.

The sequencing shows that the genome of Erwinia carotovora subsp. atroseptica is a single 5,064,019 base pair circular chromosome with 50.97 percent of guanine and cytosine, approximately 4,491 coding sequences (CDSs), seven rRNA operons, 76 tRNAs, and around 25 stable noncoding RNAs.

There are twenty pectinase genes and seven CDCs that contribute to the production of PCWDEs. The type III secretion systems secrete proteins into eukaryotic cells where they contribute to pathogenesis by disrupting host cell signal transduction and cellular processes.

Erwinia carotovora is a Gram-negative, rod-shaped bacterium that lives alone or aggregates into pairs and chains. Non-spore forming and peritrichously flagellated, it is a facultative anaerobe that is catalase negative and oxidase positive.

Erwinia carotovora produces a number of extracellular plant cell wall degrading enzymes such as pectic enzymes that degrade pectin, cellulase that degrades cellulose, hemicellulases, arabanases, cyanoses and a protease. As a mesophilic bacterium, Erwinia carotovora thrives the most in the temperature range between 27 and 30 degrees Celsius.

The genome sequencing of Erwinia carotovora subsp. atroseptica indicates that this microbe may not only be capable of nitrogen fixation and opine catabolism, but may also utilize around eighty ATP binding cassette transport systems.

In addition to infected plants, Erwinia carotovora can also be found in the guts of insects and bodies of water introduced by aerosols, runoff into rivers and dumping of potatoes.

After rainfall upon diseased plants, an aerosol containing the bacteria is created. Fifty percent of the bacteria that become suspended in aerosols can survive for five to ten minutes and may travel for miles.

This is achieved through the production of PCWDEs  such as extracellular pectic enzymes and cellulase that break down pectin and cellulose, respectively.

In addition, Eca1043 is predicted to synthesize large hemagglutinin-like proteins, pili and fimbrial proteins for host adhesion. Finally the possible horizontal genetic transfer of genes that resembled type four secretion systems of Agrobacterium tumefaciens may contribute to pathogencity because the mutation of these genes negatively affected virulence.(3)

So far, none has been found.

In the article “Using aqueous chlorine dioxide to prevent contamination of tomatoes with Salmonella enterica and Erwinia carotovora during fruit washing”, it was found that washes with chlorine dioxide can be used as a disinfectant to effectively reduce the number of E. carotovora on fruit surfaces.(4) In the article Erwinia carotovora Evf antagonizes the elimination of bacteria in the gut of Drosophila larvae”, it was found that the Erwinia Virulence Factor found in E. carotovorais not a toxin but allows for the accumulation of the bacteria in the anterior midgut of Drosophila larvae.(5) In the recent article “Genome sequence of the enterobacterial phytopathogen Erwinia carotovora subsp. atroseptica and characterization of virulence factors”, it was discovered that organism responsible for blackleg and soft-rot disease in potatoes, Erwinia carotovora, demonstrates unexpected metabolic traits such as nitrogen fixation and opine catabolism.(3)