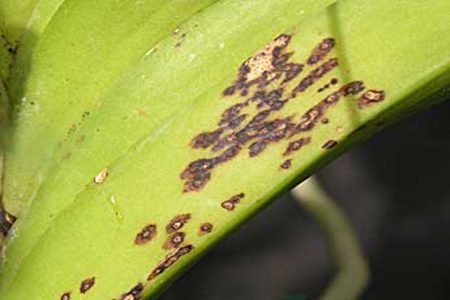 WHAT IS PHYLLOSTICTA LEAF SPOT DISEASE ON ORCHID?

Posted On June 29, 2018 at 12:33 am by lovetadmin / Comments Off on WHAT IS PHYLLOSTICTA LEAF SPOT DISEASE ON ORCHID?

Pyllosticta leaf-apot fungus (Phyllosticta capitalensis) spreads easily and causes unsightly blemishes on the leaves of orchids. It is most common in warmer climates, but can be found throughout the world on a number of different types of orchids. This blight is also known as Guignardia; the names apply to two different sexual stages of the same fungus. Dendrobiums and plants in the Vanda alliance are most prone to this fungus. Pyllosticta is almost impossible to eliminate from an infected plant.

Although it is most often seen on dendrobiums and the Vanda Alliance, the fungus also infects Brassolaeliocattleya, Cattleya, Cymbidium, Epidendrum, Laelia, Laeliocattleya, Odontoglossum. Oncidium, Phalaenopsis and a broad range of other orchids.

Two types of spores of this fungus germinate when moisture is present: conidia and ascospores. Conidia can quickly be carried from diseased plants to healthy ones by splashing rainwater, sprinklers or watering. In addition, the ascospores are discharged into the air and can travel between plants on a breeze or current. If they land on a moist leaf, ascospores germinate, infect the orchid host, and begin the cycle anew.

Although Phyllosticta  does not kill an orchid, it may weaken the plant to the point where it easily falls prey to other pests or diseases.

The first signs of a Phyllosticta  infection in vandaceous orchids appear as elongated tiny purplish or black spots along the veins of the leaves. These lesions gradually grow in size, appear as long, blackish, diamond-shaped streaks, and eventually take on the characteristic eyespot appearance — the perimeter of the spot outlined in black, surrounding a tan or gray area of dead tissue, with a black fruiting body at the center. As the infection progresses, the spots can coalesce to cover the leaf. The leaf may eventually die and drop.

On dendrobiums, the fungus shows up as leaf spotting, starting as small, circular yellow spots that gradually turn black. As the fungus matures, the leaves yellow, exhibit a black weblike pattern, become more susceptible to brown rots, and may die and drop.

Symptoms of Phyllosticta’s presence take three to six weeks to appear as tiny spots on infected leaves, and several weeks longer to manifest as easily visible lesions. Higher light levels and dry conditions inhibit the growth and spread of the fungus, where in lower-light growing areas where as there is plenty of humidity, or during a series of rainy, overcast days, Phyllosticta has a greater opportunity to gain a foothold. Spores can be easily spread by splashing water.

Isolate new plants for a period of a month to two months if possible before introducing them to the rest of your collection. This should allow enough time for any pest or disease to present itself and be dealt with, rather than allowing them to spread to healthy plants. Segregate any infected plants from those that are healthy; this fungus is highly contagious and easily spread. Watering practices should allow for the plant to dry before nightfall, to keep the environment less hospitable to fungi and bacteria that thrive in moist, dark and cooler conditions. Keep the growing environment clean. Remove all dead plant material and allow for adequate air circulation between and around plants.

Remove and dispose of affected leaves from infected plants to keep the fungal spores from spreading into the growing environment. Some growers have reported covering the mature lesions with clear nail polish to prevent the dissemination of spores.

Repeated applications of fungicides such as Dithane M45, Captan, Ferbam, Mancozeb or thiophanate-methylbased treatments will help control infection levels and can prevent new infections in healthy plants, but it is difficult if not impossible to completely eradicate the fungus in an infected host plant. As always, when using any sort of chemical control on your orchids, strictly follow the manufacturer’s instructions for dosage and safety.