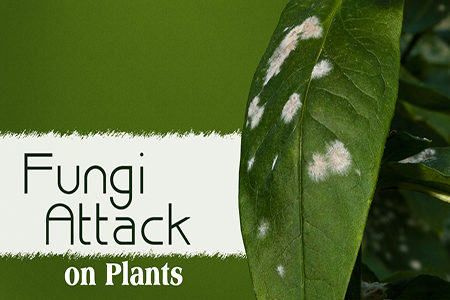 A BRIEF LIST OF PLANT DISEASES CAUSED BY FUNGI

Posted On February 3, 2020 at 12:41 am by lovetadmin / Comments Off on A BRIEF LIST OF PLANT DISEASES CAUSED BY FUNGI

Fungi are responsible for approximately two-third of the infectious plant diseases. There are many plant diseases caused by fungi, like mildew, smuts, rusts, etc. Know more about them through this article.

Fungi belong to a large and diverse group of microorganisms. They are actually cells that consist of a membrane-bound nucleus and are devoid of chlorophyll. They also have rigid cell walls. These fungi have a vegetative body, of which some parts extend into the air and others penetrate the substrate of the organisms that it grows on.

Fungi propagate through sexual as well as asexual methods and spread through spores that are produced in abundance. These spores are transmitted on plants through wind, water, soil, birds, and insects. Once one of your plants is infected by a fungus, it is important that you protect your other plants from the fungal infection.

BROWN PATCH – It is a turfgrass disease caused by different species of the Rhizoctonia fungus. Patches of brown and yellow color appear on the lawn in irregular shapes. It does not affect the roots and crown of the grass, so it is also known as Foliar disease.

CANKER – There are some fungal infections that affect the roots and barks of the plants. One such fungi is canker fungi. It is found on woody trees and is notorious for causing localized damage to the barks of trees. 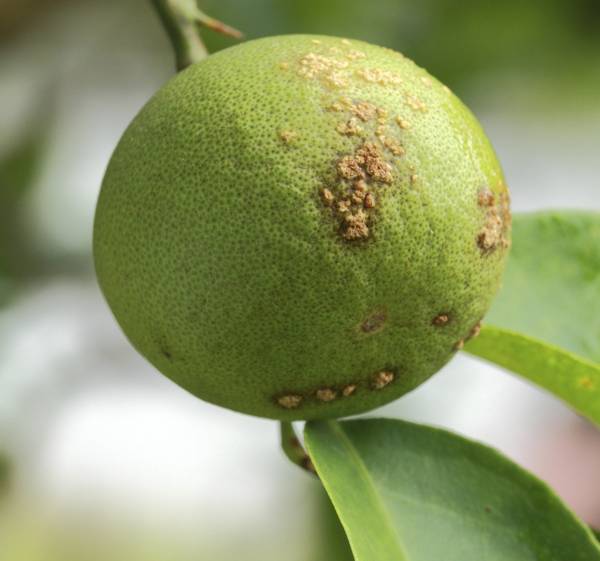 CLEMATIS WILT – It is caused by a fungus (Phoma clematidina), which makes an entry into the plant body through cuts and wounds created by insects. Generally, it appears on large-flowered hybrid plants in brown- and black-colored patches.

DOWNY MILDEW – This disease is caused by Peronosporaceae which affects a number of plants. It can be identified when discolored blotches appear on the leaves; a mold-like growth also develops on the plants. It affects the growth and strength of the plant. 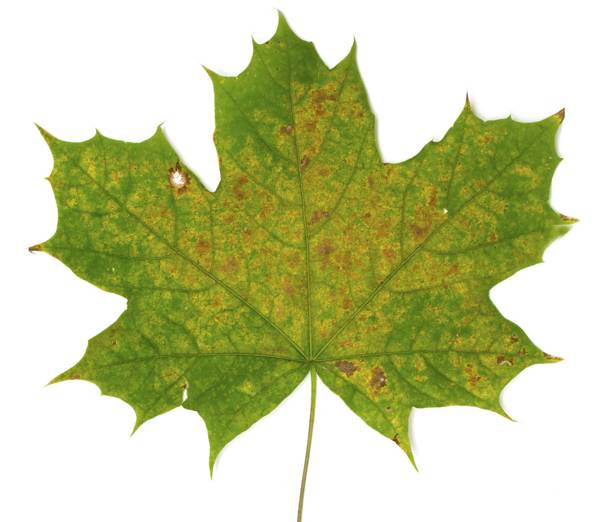 CLUB ROOT – This infection is found in cabbages, turnips, and radishes which is caused by the Plasmodiophora brassicae fungus. The color of the leaves changes to bluish-green, and the roots if pulled out appear clubbed and are easily broken.

BLACK SPOT – Diplocarpon rosae is the fungus that causes the black spot disease on a rose plant. Blackish spots that appear on the leaves gradually spread upwards and weaken the plant. It is mostly observed in humid climate.

DAMPING OFF – This is a disease caused by different fungi — Pythium and Phytophthora being some of them. It infects the seed and decays it, thus affecting the growth and vigor of the whole plant.

ANTHRACNOSE – It is a disease caused by Colletotrichum or Gloeosporium fungi which occur in warm and humid areas. In this, shrunken kind of spots of different colors are observed on the fruits, flowers, stems, and leaves. These spots gradually expand and cause the plant to die. 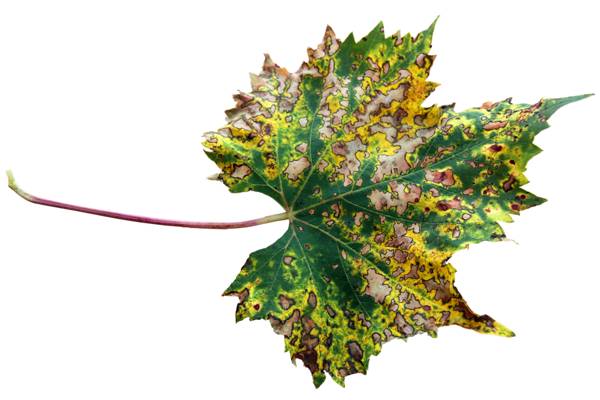 BOTTOM ROT – This is a fungal disease found on lettuce plants. The characteristic of this fungus is that it first affects the leaves on the lower part of the plant and then moves upward to affect the upper part. It is caused by Rhizoctonia solani fungus.

DOLLAR SPOT – This is a lawn disease which is a result of Sclerotinia homoeocarpa. Small and yellow-colored spots can be observed on the turf. It occurs generally in between early spring and late fall.

CROWN WART – This disease is caused by a fungus of Physoderma species that attacks the stem of the alfalfa plants. It forms white protrusions at the base of the stem of the plant.

DECAY – Decomposition of leaves and wood that is caused by fungi is called decay. It attacks living plant tissue and kills the plants. Decay is caused by many species of fungi — Pythium, Aphanomyces and Phytophthora being some of them. 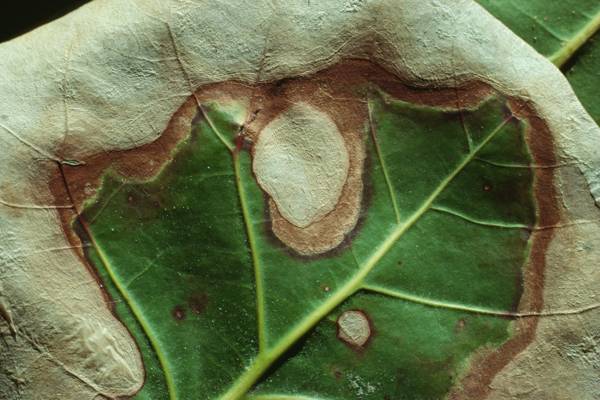 RED THREAD – This is a common disease that affects lawns that occurs generally in autumn and summers, caused by Laetisaria fuciformis fungus. Red-colored patches appear on the grass in the start and gradually kill the whole grass if no action is taken.

DRY ROT – It is caused by Serpula lacrymans, also known as true dry rot fungus. This disease in plants causes the drying and crumbling of timber, bulbs, potatoes, or fruits and is commonly found all over the world. 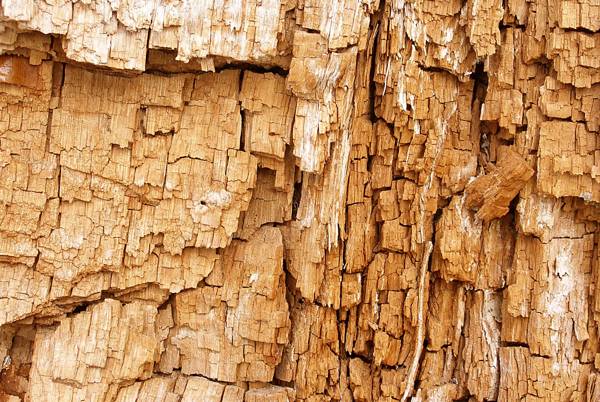 POTATO WART – Caused by Synchytrium endobioticum, it is a fungal disease that causes dark, warty, spongy excrescences in the eyes of potato tubers, similar to the crown wart in alfalfa plants.

RHIZOCTONIA DISEASE – Rhizoctonia solani is the fungus that infects potato plants, underground stems, and tubers as well. It generally occurs in the lesion form, or as sclerotia on tubers. This infection can kill the plant as it does not allow the plant to grow further.

DUTCH ELM DISEASE – This is a fungal disease affecting Elms. It spreads from one plant to another through root grafts, or by the elm leaf beetles that feed on small twigs. It is caused by Ascomycota — a member of the sac fungi. Leaves on the upper branches of this tree begin to wither and turn yellow in summer. Eventually, the entire tree gets affected, the roots die, and the tree is starved of nutrients. 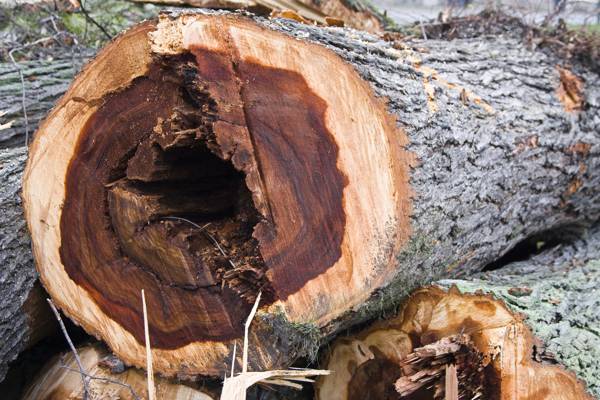 LATE BLIGHT – Late blight or blight is caused by Phytophthora infestans, which again attacks potatoes and tomatoes. Gray spots and white-colored molds start appearing on the leaves as well as the fruits, eventually killing the whole plant.

EARLY BLIGHT – Alternaria solani is the fungal pathogen that causes early blight disease in potatoes and tomatoes. It destroys the fruit of the plant and affects the life as well. The leaves and fruits turn yellow or brown and then drop off from the plant. 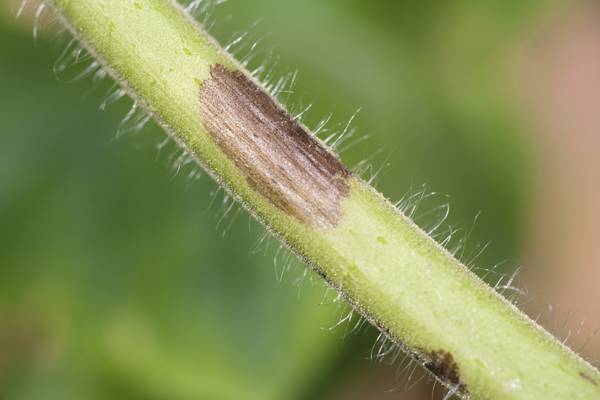 PLANT WILTING – This fungal disease gets its name because it causes the plant (it infects) to wilt. The fungal invasion starts in the roots and then slowly makes its way into the stem and plugs of the vascular system of the plant. Fusarium wilt (caused by Fusarium oxysporum) and Verticillium wilt (caused by Verticillium longisporum) are the types of plant wilting that affect many plants, like cotton, potato, tomatoes, tobacco, and so on. 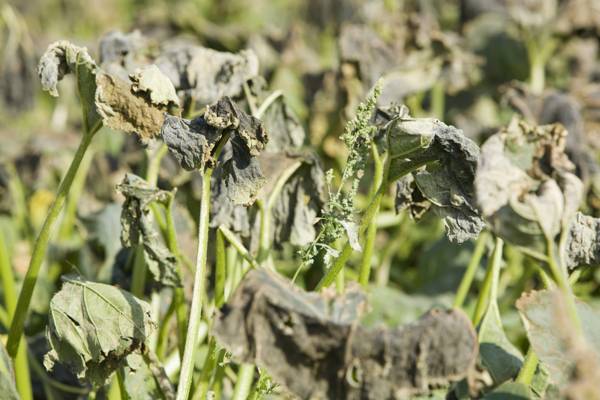 LEAF CURL – It is a disease caused by Taphrina deformans in which the leaves appear distorted, crumpled, and thickened. It reduces the production of leaves and fruits.

GRAY MOLD – This infection is caused by Botrytis, which forms a white-colored growth on plants that gradually turns into gray color. The fruits and leaves of the infected plant fall while the stems break down.

BLACK ROT – It is a disease of cultivated plants, which occurs due to humid and damp weather conditions. This disease is characterized by the darkening and decaying of leaves of fruit and vegetable plants. It is commonly found on grape vines, cabbage, orchids, and many more. Grape black rot is a disease caused by Guignardia bidwellii that specifically affects grape vines. 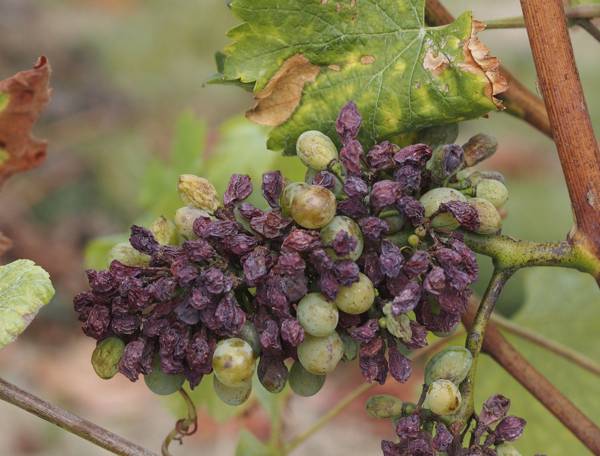 APPLE SCAB – It is caused by Venturia inaequalis, an air-borne fungus. Olive green-colored patches appear on the leaves, black- or gray-colored patches develop on the fruits eventually destroying it.

WHITE ROT – Pleurotus ostreatus causes the lignin and cellulose present in the wood to break down, affecting the color and the vitality of the tree.

SCLEROTIUM ROT – It is a result of Sclerotium rolfsii which is a soil-inhabiting fungus. This disease infects the seed and it turns into blue and black patches.

BROWN ROT – This is a wood disease which is caused by Fibroporia vaillantii in which the infection decays the wood, causing it to crack into small cubical pieces. Hence, it is also known as cubical brown rot. It shows brown discoloration as well.

POWDERY MILDEW – The characteristic of this fungal infection is that it is often specific to the host that it invades. It is normally seen on roses, lilac, English oak, zinnias, etc. 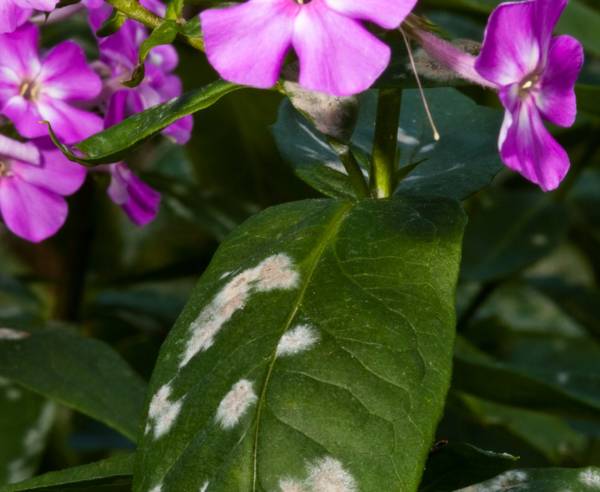 PINK ROOT – This infection is mostly found in onions caused by Phoma terrestris, a soil-borne fungus. It can be identified by light pink to yellowish brown discoloration of the roots of onion. It affects the growth of the plant to quite an extent.

RUST – This disease affects the stems, leaves, seeds, and fruits of the plant. It can be identified if spots of brown, yellow, red, or orange colors are seen. It may reduce the vigor of the plant. It is caused by pathogenic fungi. 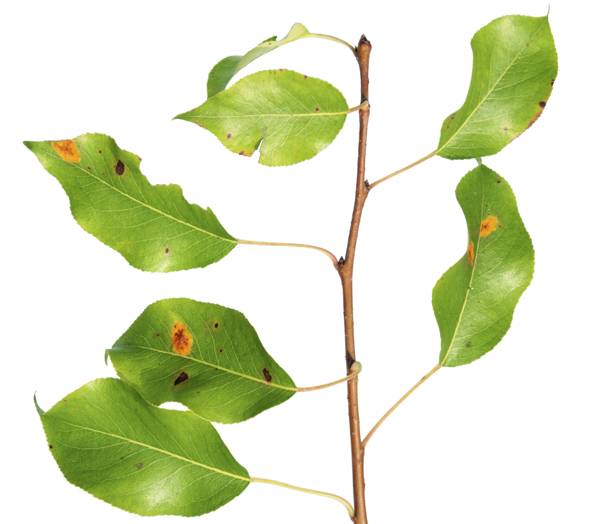 COTTON BALL – It is a disease of cranberry plant which is caused by Monilinia oxycocci fungus. Cotton-like fungus appears inside the berries, infects them, and spoils the whole fruit.

SMUT – Ustilago maydis is a fungus that affects corn and sugarcane plants. Blisters develop on the affected parts of the plant and it gets discolored as well. The kernels become huge, they swell up, and the whole plant and fruit are slowly destroyed. 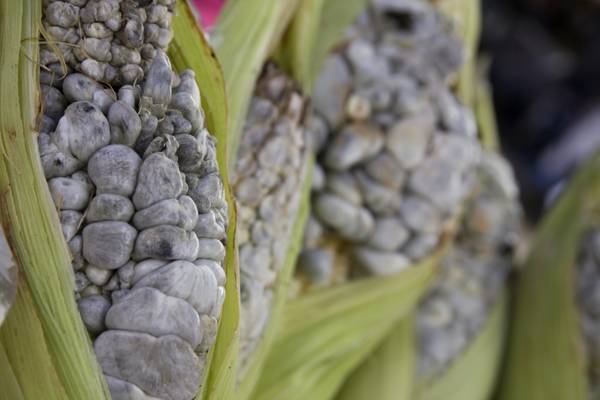 ROOT ROT – Like leaves, barks, and stems, the roots can also be infected with fungal infections. Root rot disease causes root decay, eventually causing the plant to die. It is mostly a result of Phytophthora fungus.

WET ROT – This type is generally seen in the rainy or damp areas, mostly affecting timber. It is caused by Coniophora puteana or Poria vaillantii. Wet rot mostly results in decaying of the plant. 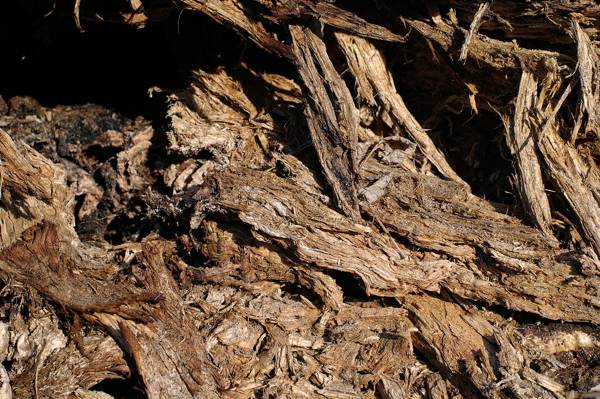 SOFT ROT – Chaetomium or Ceratocystis fungi are the reason for soft rot disease that breaks the cellulose, creating cavities inside the wood. The wood normally appears in a cracked pattern and it gets discolored.

YELLOW SPOTS – These spots are caused by Pyrenophora tritici-repentis fungus. Yellow-colored spots develop on the leaves and the stem, and if not taken care it dries up or infects the whole plant. 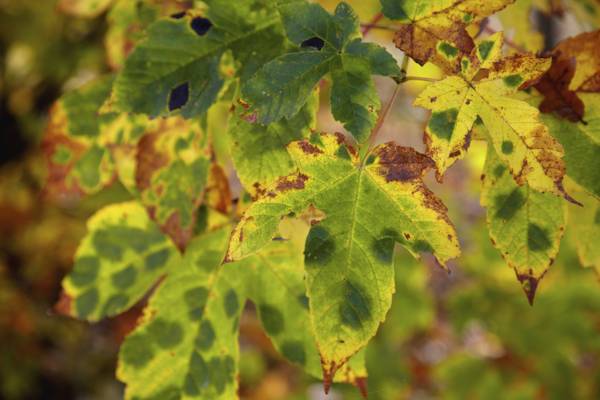 Along with fungi, even bacteria and viruses affect plants. At the same time, some plant diseases are caused by adverse environmental and climatic conditions. There are some plants that have a natural resistance to certain diseases, especially if these diseases and the plants have evolved together. Research is being carried out to check if this resistance via genetics can be transferred to other susceptible plants.