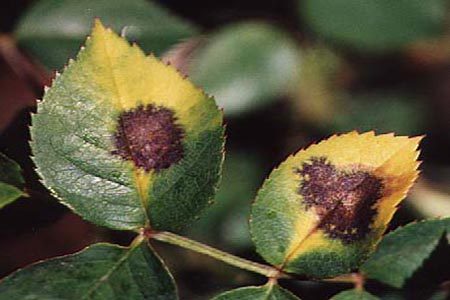 Diplocarpon rosae: This disease may also be called leaf spot, leaf blotch, star sooty mold and several other names. It is the most important disease of outdoor roses on a world wide basis. The fungus has probably been widely distributed with the cultivated rose and no really complete resistance is believed to exist.

Small black spots of 2 mm diameter can be found on upper leaf surfaces as well as immature canes. These spots are black and sooty enlarging to 12 mm with generally circular appearance but having a feathery edge. Further development involves the appearance of yellow margins around the spot and a yellow condition that can extend into the entire leaf. Late in the growing season defoliation can occur along with purple red, raised irregular blotches on immature wood.

The fungus usually over winters on infected leaves and canes as a mycelial mat rarely producing the perfect or sexual stage. As temperatures rise in the spring the fungus produces conidia which are moved by air currents or splashing water to new developing and expanding leaves which are very susceptible. Conidia germinate under conditions of free moister and need free water conditions for at least seven hours in order for infection to occur. The fungus is considered an obligate parasite producing haustoria in the host cell. As the infection develops, the leaf spot expands taking on the characteristic black appearance and producing conidia as secondary inoculum. Usually the lower and inside areas of the plant are more likely to be infected because these areas have longer time periods when free water is available on leaf surfaces allowing the germination and penetration of the fungus. Several cycles of infection and production of secondary inoculum can occur throughout a growing season.

Dormant pruning, removal of attached leaves and cleaning up old leaves under the bushes can do much to reduce the over wintering inoculum. A well aerated site will do much to reduce disease incidence by preventing the occurrence of free water on the foliage for long time periods. Pruning to allow air movement and watering without wetting the foliage could also be important means of prevention. Some roses may be more resistant than others, but specialized races of the fungus quickly arise. When conditions are favorable in early spring, protectant sprays can be used on a one week interval or after periods of rain to prevent infection. Surfactants may allow the active materials to spread more evenly on plant surfaces and persist longer during periods of precipitation. 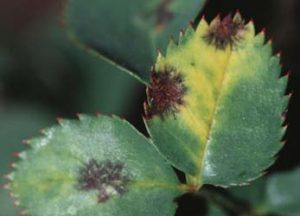 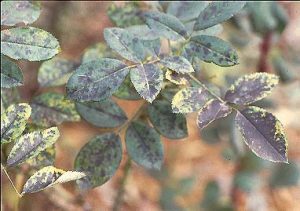 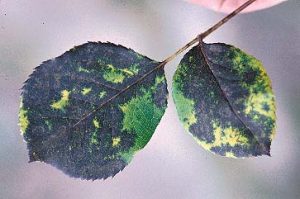